Spending on video games surged at the pandemic’s onset as billions of people were spending more time at home than they would like. It looks like the trend is reversing as economies reopen and folks look to spend more time outdoors.

Consumer spending on video game hardware, content, and accessories fell 19% in May from the year-ago month. The $3.7 billion of spending in May was the lowest since February 2020. Let’s look at why the slowdown is bad news for video game retailer GameStop (NYSE: GME).

In its most recent quarter, which ended on April 30, GameStop reported $1.378 billion in sales. That increased from the $1.277 billion it reported in the same quarter of the prior year. GameStop is a brick-and-mortar retailer with thousands of locations worldwide. As a result, it was devastated at the pandemic’s onset when it had to shut its doors to customers temporarily. It has been bouncing back steadily, buoyed by a resilient gaming market.

Unfortunately, that has been a long-running negative trend for GameStop. Manufacturers offer physical and digital copies at mostly the same prices. Hence, the consumer has more incentive to purchase a digital copy that they can download and start playing in minutes versus traveling to the nearest GameStop to buy a physical version.

Even before the coronavirus outbreak, this trend was causing sales to fall for GameStop. Between 2013 and 2019, revenue fell from $8.9 billion to $8.3 billion. That said, some gamers prefer physical copies of games because they can sell them when they are finished playing. Similarly, they can purchase used copies for lower prices than a digital download. However, that segment of gamers has not been enough to stem the tide of losses at GameStop. 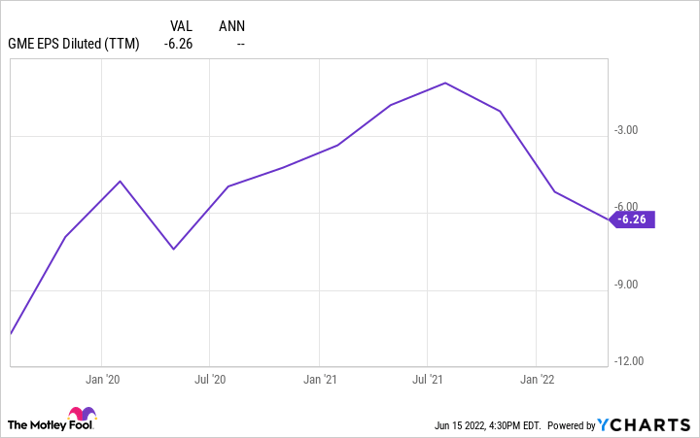 GameStop has reported losses on the bottom line for several years. The company is taking steps to turn things around, but there is no telling if those will pan out in the long run. What remains stubbornly persistent are its high expenses coupled with declining revenue. The trend of shifting to digital copies is not likely to reverse as it is also more profitable for manufacturers (no need to spend money on packaging and shipping).

With that backdrop, GameStop’s prospects do not look good. If you own GameStop stock, it looks like an excellent time to sell. If you were considering purchasing, it would be prudent to steer clear.

10 stocks we like better than GameStop
When our award-winning analyst team has a stock tip, it can pay to listen. After all, the newsletter they have run for over a decade, Motley Fool Stock Advisor, has tripled the market.*

They just revealed what they believe are the ten best stocks for investors to buy right now… and GameStop wasn’t one of them! That’s right — they think these 10 stocks are even better buys.