Arma 4 Release Date: Arma 3 has 14 DLCs, and two more are on the way. These DLCs add to the basic infantry squad gameplay a lot of tanks, planes, helicopters, vehicles, cars, weapons, and battlefield equipment.

Changes to Season 3 could add hundreds of hours of game time.

Arma 3 is an old computer and console game. Since the 2013 game is eight years old, people want to know when Arma 4 will come out for PC and consoles.

As big fans of Arma, even though we’re not very good at it, we’re eagerly waiting for the release date, trailers, and anything else we can find out.

Details about Arma 4 are below.

Arma 4 is coming for sure. The Czech developer Bohemia Interactive’s Armed Assault series, now called “Arma” instead of “Armed Assault,” has been known for a long time as the best multiplayer military simulation (mil-sim) shooter.

Arma 3 has been available for almost a decade. Arma fans can’t wait for Bohemia Interactive to come out with a new Arma game.

Even though the game hasn’t been released yet, Bohemia Interactive has indirectly shown what the game’s engine is.

You might be excited by the news and updates, but there will be no official Arma 4 release date announcement any time soon.

I have been playing the Arma games since 2009. Arma 3 came out of nowhere, it seemed when Bohemia Interactive released it. It was the Arma 2 DayZ mod where I first heard it. Some players put it in the global chat. I checked right away to see if there was steam, and there was.

Arma 4 could have the same thing happen, or at least that’s what I think will happen.

Arma 3 was in bad shape when it came out in 2013. Since it was in early access, there were many problems and bugs. But BI kept adding new features and making other changes to the game.

Arma has been going strong for years because it has a great community that you won’t find in other games.

Is there any Trailer for Arma 4?

There are no Arma 4 trailers available right now, which is a shame.

To stay up to date, we’re keeping an eye on every Bohemia and Arma-related channel for news, rumors, and possible leaks. As soon as possible, any solid things will be given.

Arma 4 will use the Enfusion game engine, which gives us an idea of what to expect from the game.

Given how long Arma 3 has been around – and especially during the extended gap between the last full-scale official DLC in 2019 and the fantastic Vietnam-focused S.O.G. Prairie Fire Creator DLC in 2021 – fans have been on the lookout for Arma 4 leaks that claimed Bohemia was hard at work on a sequel.

The unveiling of Arma: Reforger — an early access proof-of-concept preview game for Arma 4 – in May 2022 is the first substantial official development in years, but we’ve heard that term before.

Arma Reforger first surfaced in January 2021, when a user named @biostiel shared some apparently leaked game screenshots with a logo that read “Arma Reforger” on Twitter, which some community members (at least on the Arma subreddit) mistook for a genuine Bohemia Interactive insider with privileged information about their current projects. 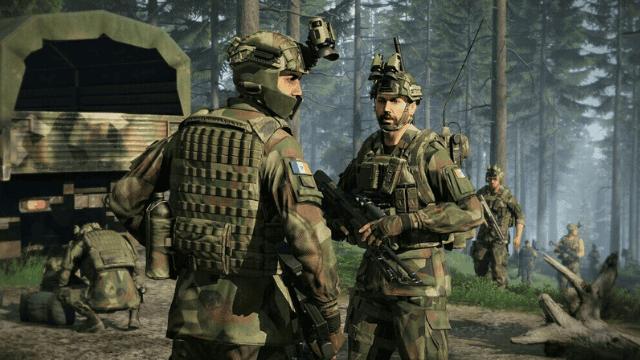 Whether or if they were genuine insiders, @biostiel quickly amended their statements, claiming that the game displayed in the purportedly stolen photographs was not Arma 4, but rather an unnamed, smaller-scale, multiplayer-only shooter project. This appears to be the same project that Bohemia would unveil to the world in May 2022.

Biostiel also mentioned that the next mainline Arma game would be “years away.” The @biostiel account has subsequently been deactivated, as have all of the original tweets.

In January 2021, a claimed leaked screenshot from a Bohemia project called Arma Reforger was circulated on Twitter and Reddit.

The night falls, and our watch continues. We’ll update this page as soon as we have something more significant – or, ideally, official – to talk about Arma 4.

When Will Arma 4 Be Released?

At This Moment, There Have Been No Announcements or Plans for Arma 4.

Is Arma Reforger Available on Xbox?

Arma Reforger Is Currently Available on Steam Early Access and Xbox Game Preview on Xbox One and Xbox 360.

Is Arma Reforger Available for Free?

Is Arma Released on Playstation?

At This Point, It Looks That the Developer Has No Intentions to Support an Arma Ps4 or Ps5 Release.