In 2021, Resolution Games released Demeo, a VR game, to Steam Early Access. The game soon received a non-VR edition called Demeo: PC Edition which finally graduated from Early Access (and received a new campaign) in December. Demeo is a “cross platform cooperative adventure” that looks and plays like a fantasy-themed board game. Now that the full game has been released, I jumped at the chance to try it out in both 2-player and 4-player online co-op.

Demeo is an original digital board game that can be played solo or in co-op. The game currently offers five campaigns, with “Book V: Reign of Madness” having been added in December. Each campaign is like going through a Dungeons & Dragons adventure. They all take place in unique dungeons, have their own simple story premises, and feature unique enemies and challenges to overcome. Different campaigns have different difficulties, too, so you’re encouraged to start with the easier ones first.

After choosing to play solo or host or join a multiplayer game, the host will first choose a campaign. Everyone then selects their hero or heroes. The party will consist of 4 heroes regardless of player count. Playing by yourself, you’ll control them all, whereas everyone controls an individual hero in a 4-player game. Demeo offers eight heroes to choose from, each with a simple backstory and unique stats and abilities. Multiple players can pick the same character, so you can have two archers on a team, for instance.

A single campaign (game) consists of three floors for the team to conquer. Players will move from room to room, contending with any enemies within, while searching for gold, healing fountains, the key to the exit, and the exit itself. Each hero gets two moves/actions per turn, so you can do things like heal and attack in the same turn. In addition to a standard melee attack, every hero has a deck of cards that can be used during an action. These are basically spells, summons, and special moves. Some are single-use whereas others recharge after the turn ends. 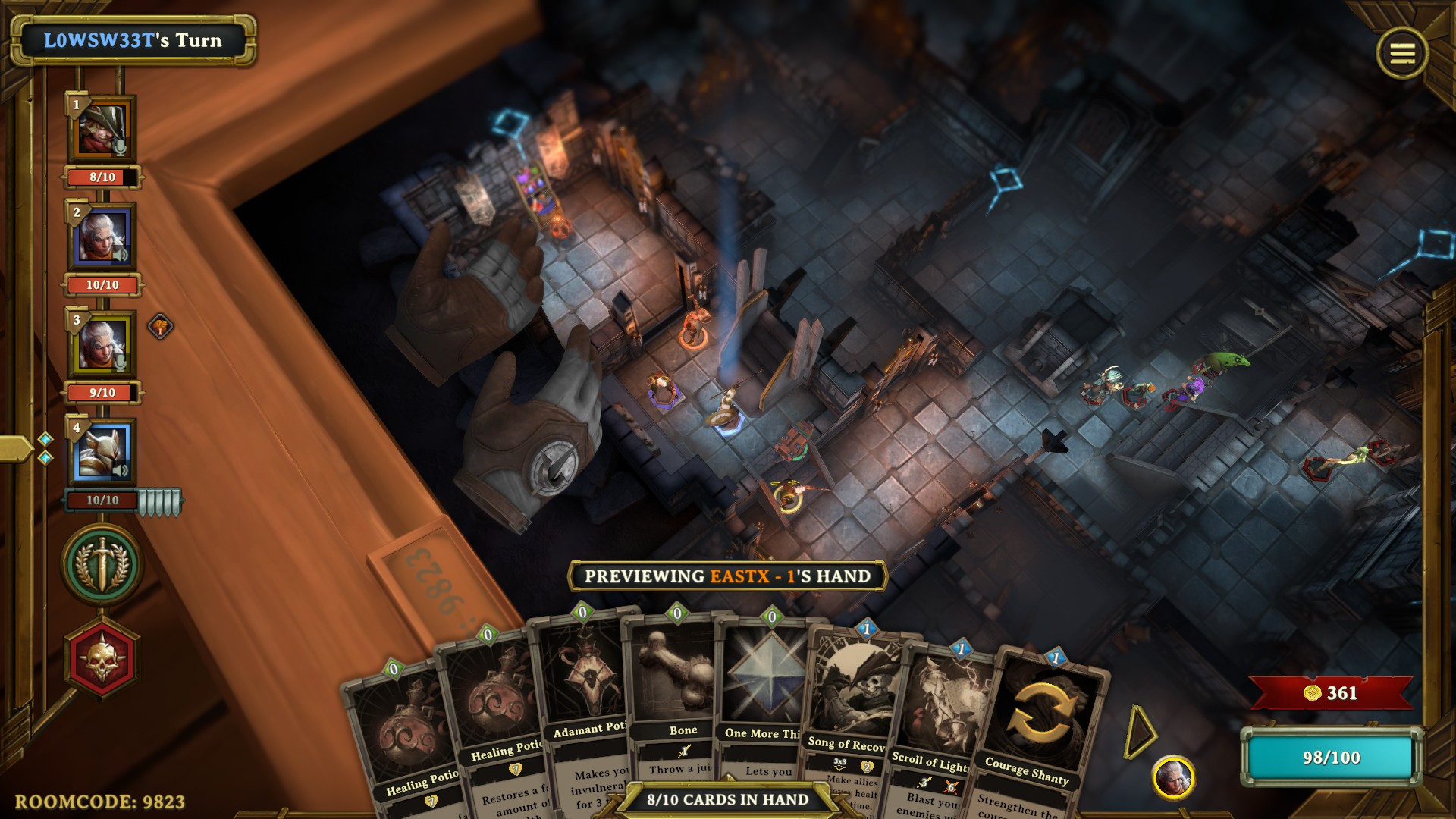 I got into Demeo after some of my virtual reality headset-owning friends talked it up. On Steam, the PC and VR versions of Demeo are bundled together. Both versions can play online games together, thankfully. In our 4-player game, two of us played the PC Edition while two played in VR. The VR players have a little more freedom to look around during gameplay and in menus, but the mouse-and-keyboard experience doesn’t feel bad at all. You still get to see the virtual hands of VR players when they move their characters around, which really adds to the board game feel of the experience.

While Demeo has a steep learning curve at first (especially when playing solo), the cooperative experience is really great. Discussing moves and working together to take out hordes of monsters with friends is just a blast. Games run a few hours long, but everyone can save and quit between floors during a campaign.

Demeo is coming to PlayStation 5 on February 21. The PlayStation version will support the upcoming PS VR2 headset, but it will also be playable without VR. Even better, the Steam and PlayStation 5 versions will be able to plat together! Preorder Demeo on PlayStation 5 now for a 20 percent discount off the regular price of $39.99. The Steam version sells for $39.99 as well, and there’s also a free demo.