Redfall is a new co-op FPS from Dishonored creators, Arkane. As we await the shooter’s launch later this year as an Xbox Series X|S console exclusive, let’s go through everything we know about Redfall so far…

As a first-party Xbox Game Studios release, Redfall will be one of the many games coming to Game Pass in 2023. To help get a better idea of what to expect from the upcoming shooter, we’ve put together a rundown of everything we know about the game so far.

Redfall: Everything we know so far

Redfall is a co-op, story-led open world first-person shooter from Dishonored and Prey developer Arkane, one of the most exciting Xbox Game Studios teams and responsible for some of the best games on Game Pass. Redfall also features RPG elements with its character progression, branching skill trees, and varied loot from which to assemble a killer build and take back the quiet suburban town of Redfall from the vampires and their followers who have overrun the place. “Redfall has everything you could want from a cooperative, story-driven FPS experience, plus everything Arkane fans have come to expect from the studio,” we’re told.

We’ll be whisked away to the fictional island town of Redfall, Massachusetts, which has, quite frankly, seen better days. Vampires have claimed this once-quaint town as their own, with the most powerful ones using their godlike abilities to block out the sun and force back the tides to make the place a little less… well, deadly for their kin. Bloodsuckers and their devoted followers now roam the streets in search of anything that hasn’t yet been drained of its lifeblood, and it’s up to us as an unlikely band of vampire hunters to drive the town’s new residents out by force, learning a bit about what they’re up to and how this messy situation came to be in the process.

When does it launch?

All we know right now is that Redfall will be coming to Xbox Series X|S in the first half of 2023. The game is set to get an in-depth showcase at Microsoft’s Developer Direct event on January 25th, so we’re hoping for a firm release date there too. Rumours suggest a possible May launch, but we’ll find out for sure soon enough. Redfall was initially supposed to launch in 2022, but was delayed into 2023 along with Bethesda’s epic space RPG Starfield.

Is Redfall coming to Game Pass?

It most certainly is, yes. Redfall is a first-party Xbox game, meaning it will join Xbox Game Pass and PC Game Pass on day one, and remain in the service indefinitely. Xbox Cloud Gaming support has not yet been confirmed, but seeing as the majority of big first-party games do use it, we would be quite surprised if Redfall did not.

Will Redfall be on Xbox One?

No. Redfall is only planned for release on Xbox Series X|S and PC at this time, making it one of the first Xbox first-party games set to leave Xbox One behind. Other upcoming releases like Starfield and Forza Motorsport also appear to be following suit by exclusively targeting current-gen consoles. 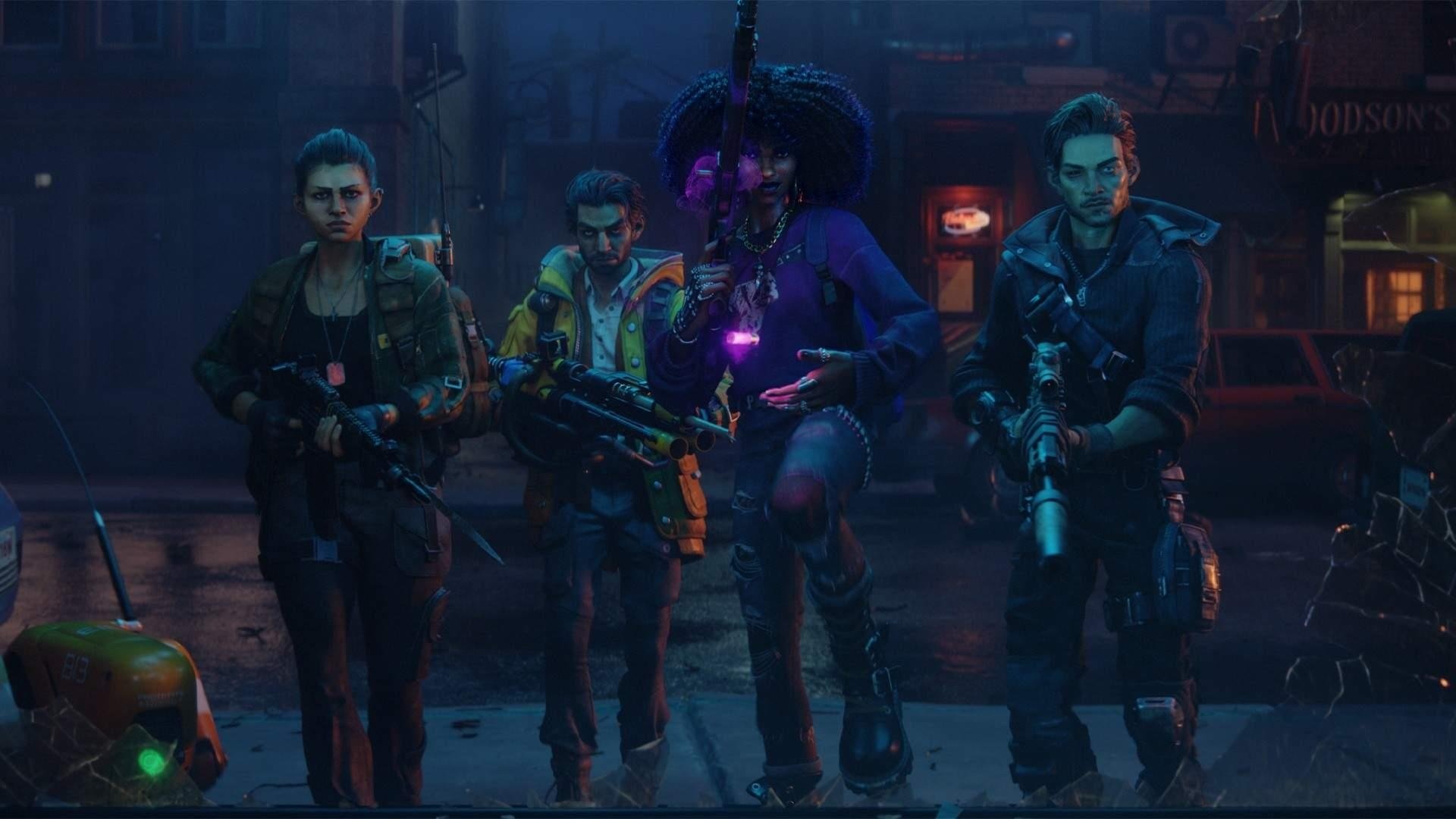 Who are the playable characters?

Redfall will launch with four unique playable characters, each bringing their own skills and kit to the vampire hunt. Thanks to Borderlands-esque divergent skill trees, you and a friend could both use the same character but end up with very different builds and play styles. It’s possible we’ll see more characters added down the line, just as the somewhat similar Back 4 Blood has introduced new Cleaners with each of its major updates, but for now, meet the quartet we’ll be using.

Devinder Crousley: Inventor, cryptozoologist, author, and “self-styled cryptid-hunter” Dev is all about the gadgets. Having done a bunch of research into the vampire threat for his books (which is what brought him to Redfall in the first place), he now needs to turn that theory into practical application, crafting bespoke weapons and gear specifically designed to make life suck for the bitey folks.

Jacob Boyer: Former military sharpshooter Jacob hasn’t had the best time since arriving in Redfall, with an unfortunate (or fortunate, depending on how you look at it) run-in leaving him with a vampiric eye and a strange spectral raven companion. His feathered friend and ranged expertise make him well-suited for recon and stealth, so he’s probably your guy if you want to get things done from a distance.

Layla Ellison: Just a perfectly ordinary student from Redfall Technical University… well, except for her host of telekinetic abilities thanks to a botched clinical trial. Layla’s neon mind powers can take on all kinds of forms, from shield bubbles to ward against incoming projectiles and devastating force waves to spectral elevators that can help her and her buddies reach new heights, so she seems like quite the all-rounder.

Remi de la Rosa: If you want to make sure you’re never alone, even when playing solo, gifted engineer Remi will be the character for you. She’s joined by a robotic companion of her own creation, Bribón — “a decoy, cover, and attack drone all in one.” As a former coast guard, she’s no stranger to rescue operations, although the vampiric disaster that has hit Redfall is a little different to your standard rescue operation…

How does it play?

While a first-person shooter at its core, Redfall has a lot more going on. The fact that you have a character level should make it clear that there are some RPG elements in play here, with each character also having their multiple skill trees to explore and expand that cover both individual traits and abilities and generic ones for simple stat boosts and such. Redfall initially drew comparisons to Left 4 Dead due to its co-op focus and undead enemies, but Arkane’s Ricardo Bare recently downplayed the similarities. “In terms of the way that you play and experience Redfall, it’s not like those games at all. Redfall is more like loading into Far Cry,” he said. There’s also a loot system seemingly not too far removed from that of Borderlands, with looted gear coming in various colour-coded rarity tiers and each item having “randomised weapon traits to make each drop feel like one of an endless potential of combinations,” according to production director Ben Horne. It’s not all intense action, either, and some approaches can really slow things down to a far more considered pace that brings in stealth elements, especially useful if you need to play things safe when going it alone.

So you can play solo?

Indeed, and Arkane is keen for both options to offer a similarly great experience for players. “Redfall is an open world game, but it can be soloed with any of the heroes,” explains studio director Harvey Smith. “The pace becomes more exploratory; you can use recon and stealth to gather info on encounters and avoid enemies or get the drop on them.” You’ll need to pick your battles a little more when you don’t have the safety in numbers of co-op play, but Arkane has been keen to emphasise that fact that Redfall will feel mechanically familiar to the likes of Prey and Dishonored so fans shouldn’t feel too out of their depth here.

How big is Redfall?

Absolutely massive, by the sound of things. As a fun experiment, the team once dropped the entire Talos 1 map from Prey into Redfall, and it fit into the same space as a single mission area in the new game. Arkane describes Redfall as “the studio’s most ambitious title yet,” and while we’ll have to wait until we get our hands on it to truly see how vast its world will be, that Prey comparison makes it sound like there will be more than enough to explore in and around the town of Redfall when the game launches later this year.

What do we know about the vampires?

Redfall’s version of vampires aren’t your classic fantasy kind. They’re the products of bad science at work, born from a longevity experiment looking to extend human life which went a bit wrong… or very right, depending on who you ask. Transformed by these trials, the monsters continue to evolve, and while you’ll bump into (and impale) plenty of low-level ‘minion’-type vamps, others have already evolved to gain gruesome new abilities, with a select few rising through the ranks to become the lords and gods at the very top of the food chain. It seems like an interesting take on a classic monster type, and one unafraid to toy with expectations a little. “The vampires of Redfall play into some of those assumptions, but by no means all, bringing a modern take on the folklore that is uniquely Arkane,” explains Arkane’s Susan Kath.

Is it just vampires?

While vampires are the main event in Redfall, the town has other threats up its sleeve as well. We already know that we’ll also be facing off against cultists who follow and worship the bloodsuckers, and that this will play out in a more standard FPS style than chasing down and staking the tricksy vamps. This is likely where the Far Cry comparison comes from, since clearing out a nest of all the human followers around it seems like it will play out similarly to capturing outposts in FC and similar games, albeit with the added horror of having a powerful vampire to deal with after you break up the party. We could also see more traditional military opposition too, if some of the military-grade gear lying around is any kind of clue… assuming there even are any, the remaining survivors from any previous groups to try and send the vamps packing would probably be a little jumpy.

We don’t have the Redfall achievements yet, but previous Arkane games and their achievement lists have shown that the studio likes to encourage players to explore all corners of its games across multiple playthroughs. Take a look at the Dishonored, Deathloop, or Prey lists and you’ll see all manner of achievements for playing and completing the games in a variety of specific ways… something we’d expect to see repeated with Redfall to get players experimenting with different builds and play styles across all four characters.

Looking forward to playing Redfall when it arrives on Xbox Series X|S, PC, and Game Pass later this year? Let us know!