The FIFA 23 career mode is getting a smattering of new features before EA’s partnership with football’s governing body hangs up its boots and EA Sports FC takes its place in the sports game world. Career mode often plays second fiddle to Ultimate Team thanks to features like FIFA 23 Heroes, but that doesn’t mean it’s been left to wither.

The focus this year is very much on useful additions rather than major overhaul, including tweaks to both Player and Manager careers, as well as new teams and leagues to play with. Here are all of the new FIFA 23 career mode features and team changes announced so far for the 27 September release.

RIP Piemonte Calcio. Everybody’s favourite fictional club is no more after EA secured the Juventus licence following a three-year hiatus. While that’s good news for fans of Italian football, many of the Serie A giants will be missing in FIFA 23. Champions AC Milan have signed an exclusive deal with Konami’s eFootball. The likes of Napoli, Atalanta and AS Roma will also be absent this year, while big-hitters Inter Milan have already secured a deal that gives EA’s rival exclusivity from July 2024.

Konami’s new agreements with Liga MX and the J-League also mean they will be removed from FIFA 23. Alongside this, Russian teams won’t feature due to the country’s ongoing invasion of Ukraine.

It’s better news for Women’s club football, though, with the Women’s Super League and French Division 1 Arkema added to the game. Here’s all the clubs set to join the lineup:

Onto the new features, there’s some interesting stuff here, although it remains to be seen how fresh the game will feel for those who have invested significant time over the last few seasons.

An increased customisation option is being added for those who love to focus on the player career mode. Taking your created pro from the reserves to superstardom has grown stale, but EA is looking to inject some life with a new personality system.

Mavericks seek individual glory and their name in lights. If you choose to shoot from a difficult angle instead of assisting a teammate for a tap-in, you can bet you’re heading down this route. More selfish players might also choose to buy a sports car or invest in businesses in newly added activities away from the on-field action.

Heartbeat players are defined by reading the game well and leading by example in their daily lives. Virtuosos are skilful, intelligent players who prioritise effective technique, but may act spontaneously during a game and away from matchdays.

Options such as launching a phone app, clothing brand, or esports team will underline what type of player you are. There are also team-based activities, such as visiting injured colleagues in hospital or deciding to read a book by a club legend, which will appeal to those who only want to take the righteous path.

This is perhaps the most useful addition in FIFA 23’s career mode. Playable Highlights will bridge the gap between the slog of playing every 90 minutes to completion and the risk of running a quick sim.

Although previous FIFA games allow players to watch sims play out in Football Manager style before hopping in to take control whenever wanted, FIFA 23 will streamline the process. Playable Highlights will give you the responsibility for situations that would influence the outcome of the match only. So think one-on-ones and anything that may or may not lead to a goal. 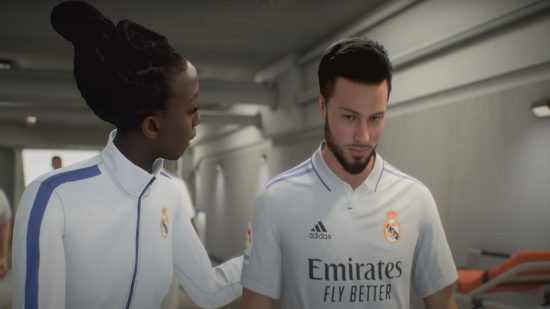 It’s really hard to be excited for cinematic sequences. Both FIFA and ye olde Pro Evolution Soccer have already tried press conferences and the like. It’s always repetitive and feels quite alien.

Even so, FIFA 23 will have cut-scenes to heighten key moments, such as when you switch clubs, sign a world-renowned talent or achieve something special in your career. Just avoid eye contact with the soulless avatars of players who haven’t lent their voice to the game.

Transfer negotiations are quite repetitive in FIFA 22 and haven’t really changed in a few years. While it seems the base system is staying the same, you’ll now receive an evaluation once a deal is confirmed. These will grade how well negotiations went, provide pointers on how to improve and offer hints as to where your new signing would best fit in.

Ever wanted to omit the scowl of Antonio Conte after Thomas Tuchel has dented his palm with an aggressive, and frankly, strange handshake? Now you can. Real managers are now playable, meaning you can assign them to any club you desire to play with in career mode. Time to watch out for Pep Guardiola’s Accrington Stanley.

Last and definitely least…a new menu interface promises to make navigation faster. EA noted that players spend most of their time in the menu, so want to ensure things are as simple as possible to find. That said, it is incredibly similar to FIFA 22 from what we’ve seen so far.

FIFA 23’s new features should keep things ticking over until what seems like the perfect opportunity for significant changes when the first EA Sports FC arrives in 2024. Make sure you’re all caught up on the top 100 FIFA 23 ratings while you’re at it too, along with the FIFA 23 icons we know about that will feature in Ultimate Team.