All Elite Wrestling’s newly-created games division made an announcement several months ago that plans have been put in place for launching the promotion’s first-ever console video game and since then top AEW Star and one of the promotion’s EVPs “The Cleaner” Kenny Omega has been providing regular updates of possible timelines of when the console video game could be launched and the game’s gameplay.

“The Cleaner” Kenny Omega recently made an appearance on the “Put Your Quarters On The Glass” podcast and provided an update on the promotion’s first-ever console video game, saying that hopefully, there is something they can show to everyone really soon and he knows there is something that will actually be released soon as well as how he hopes the game will be released sometime this year, but there will be something shown in the next coming months like an in-depth look of where they are at currently.

This is what Kenny Omega said:

“I mean, we’re working real hard on it, trying to get something presentable, something that is gonna be complete ASAP.” “And hopefully, that means this year. Hopefully, we’re also gonna have more materials to show everyone real soon. And I know that there should be something actually really soon being released.”

“I’m not sure when this [podcast] will release but you may have already seen it by now. And that’s just a little taste for things to come. But there should be something more expansive, something a little more of an in-depth look I would say, in the upcoming months for sure, just to keep everyone up to speed and let everyone know where we’re at.”

Kenny Omega also talked about the upcoming Street Fighter 6 video game and how he feels WWE Superstar Xavier Woods (Austin Creed), who has been Omega’s long-time gaming rivalry, doesn’t have the skill to compete at fighting games and doesn’t have the necessary abilities either to be a threat to him.

This is what Kenny Omega said:

“Austin’s talking about going back in [with] Street Fighter 6.” “And you know what? It’s a fresh start for everyone – a clean slate. I’d like to see what he’d be able to scoop together. I don’t think he has a natural skill. Or, I don’t think he has the natural acumen for fighting games. I think to be good at fighting games takes a lot of skill. It takes very flexible and nimble digits.”

“I think it takes an ability to read your opponent and to be able to analyze the situation and act accordingly. These are all skills that Austin Creed doesn’t have whatsoever, and poor judgment on top of that. So, bad decision-making. He just doesn’t have it in his inner workings, in his guts.”

Fightful Select reported last month that the promotion’s first-ever console video game will feature a story mode and members of the AEW roster were helping out, giving input and providing what was needed in completing the video game. It was also mentioned that when it was first announced that AEW will be launching a console video game, no timeframe was provided, but there has been talks of the video game being released sometime in September, though that was only a tentative date and there hasn’t been any confirmation yet. It was also noted that despite there still being a lot of work to be done, the plan for quite some time now has been to release the video game this year and September is widely regarded as the target release date.

Even though September is only a tentative date and there is a huge possibility that the game could be released at a later time, AEW President and CEO Tony Khan, alongside AEW announcer Justin Roberts and AEW referee Aubrey Edwards asked the fans inside the Petersen Events Center last week on AEW Dynamite to participate in recording several chants for the game. Some of those chants for the game are “FTR,” “Cash,” “Dax,” “Boom,” “Bay Bay,” “Adam Page” and “Sting” and AEW CEO Tony Khan would even tease that the title of AEW’s console video game is “AEW: Fight Forever.”

AEW’s upcoming video game is scheduled to be released on PlayStation 5, PlayStation 4, Xbox Series X/S and Xbox One and more information is set to be released sometime next week as the AEW Games Twitter account revealed that they have something very exciting to show the fans on All Elite Arcade and it’s going to be a sneak peak of the console video game.

You can check out Kenny Omega’s comments in the video below, along with a tweet from AEW Games: 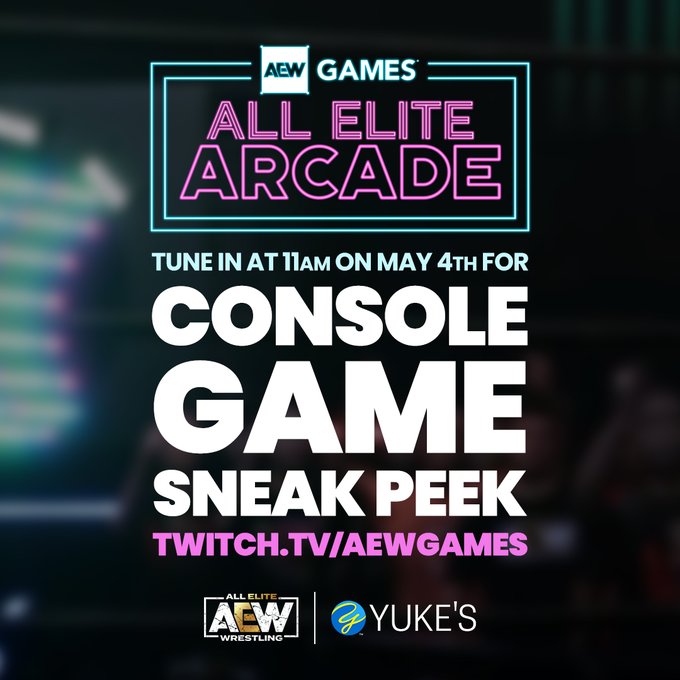