Thursday evening, the students participated in a nationally ranked championship by playing video games at school. The tournament was one of more than 50 the school has participated in thus far.

Joined by four coaches, parents and siblings, students played in a final competition within the video game Knockout City.

The tournament, hosted by the Middle School Coaches League (MSCL), saw middle school students from all across the country clash in a contest of wits and hand-eye coordination.

“We’ve got a strong team in place. Whatever happens tonight, happens. Enjoy it,” coach Matt Miller told his players as the tournament kicked off just after 7 p.m.

The players were less serious in their interactions with each other than they were in their own gameplay. Player Kaleb Williams joked his teammate Atticus Harper was “mentored by Louis Lane.”

“Who’s Louis Lane!?” Harper shouted back, laughing with confusion. “Actually, Bob Ross teaches me. He taught me all my skills from beyond the grave. I’m a crazy man. Kaleb is really good at the game. Make sure to put that in the paper. Guys, I’m being quoted!” 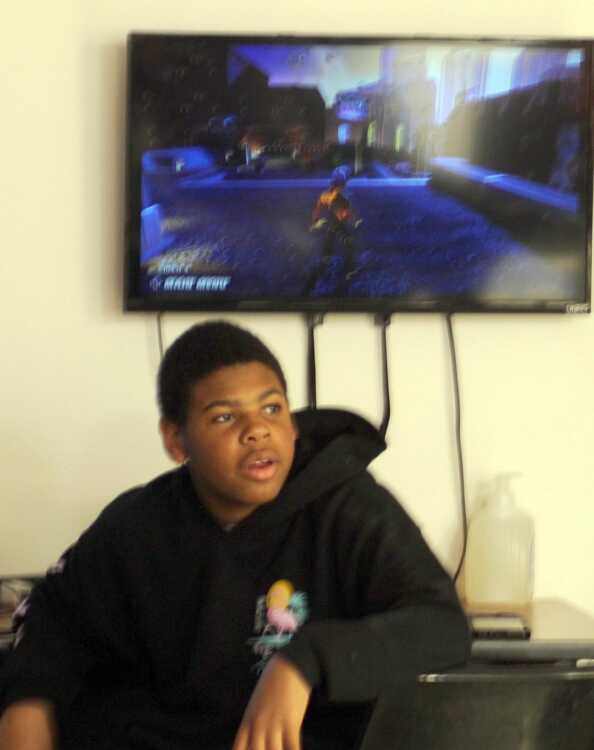 At times, the night seemed much quieter than a traditional sports championship. Players remained firmly rooted in their chairs, eyes focused on glowing screens, faces masks of concentration interpolated with bursts of emotions.

Get our Daily Headlines

Sent right to your inbox.

Excited remarks were exchanged by teammates.

“Guys, stay together, don’t run away from each other,” interjected coach Geoff Seyer.

By the end of the night, Cape Girardeau’s Team 1 won second place and Team 2 won third place out of 30 registered teams competing.

When Williams was asked how he felt after the game, he said, “My chest is hurting, and my heart is beating really fast.”

“I’m good at both but I’d say I’m better at Smash Bros.,” Williams said. “It’s been about a year since I’ve joined [esports]. I joined because I needed to get out and it was fun.” 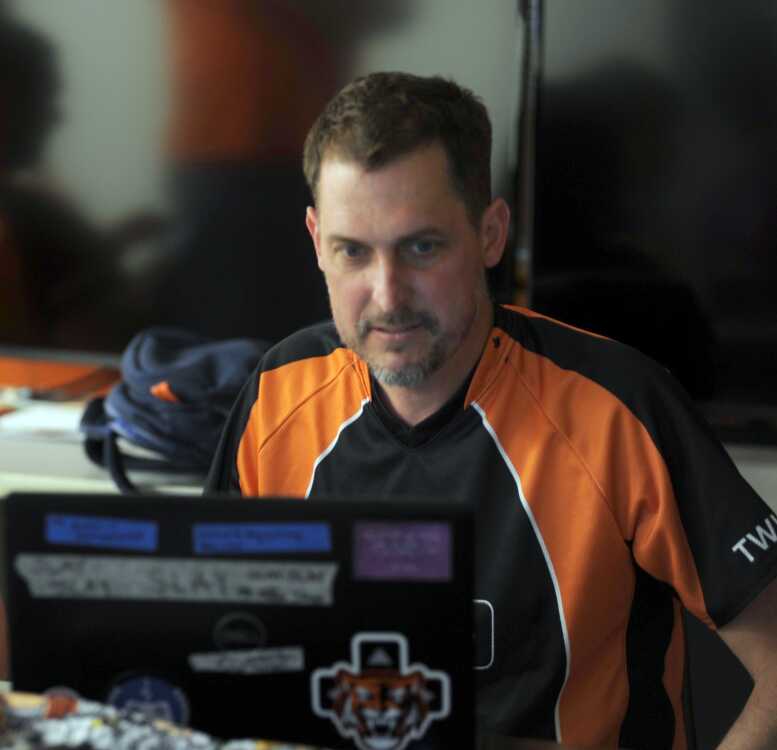 Coach Miller said he’s been bringing video games into school settings for the past four years. What began as an “open club atmosphere for kids who were bored in the morning,” according to Miller, took time to evolve into national championships.

At the junior high school level, there just wasn’t enough infrastructure for esports to initially thrive, Miller said. Eventually, however, other teachers volunteered their time as coaches, creating an “esports internal team.”

Miller explained, “We created three teams, one for each coach, and we battled each other internally. That was our way to get our feet wet. It was the next year when the MSCL, which is the national league, got involved.”

The MSCL offered national tournaments where Cape Girardeau Junior High students could compete with schools all across the county. It wasn’t long before the young Cape Girardeans revealed they could hold their own on the national stage.

When he was a student, video games were seen as “not that good of a thing. But now they’re being embraced,” he said.

“The evolution of the phone is what made it. Nobody can really say video games are dumb now, because everybody from age 4 to 90 are playing games on their phone,” Miller said. “The whole culture is immersed in games. My dad is like 80 and he plays games on his phone. This is the world we live in now.”

“Honestly, it’s the same stuff, in a lot of ways. We have to actively learn and our kids have to actively practice, research and do the work if they want to improve,” he said. “We form the same relationships and bonds that carry through into education and into the classroom. We [coaches] have some pull with those kids, so if a teacher says something to me about a student having problems, I’m more than happy to pull them out and talk to them about it. We form those relationships and bonds with the kids through this video game platform where we feel more like equals. So during the regular school day we can use that common ground to get kids to perform a little bit better.” 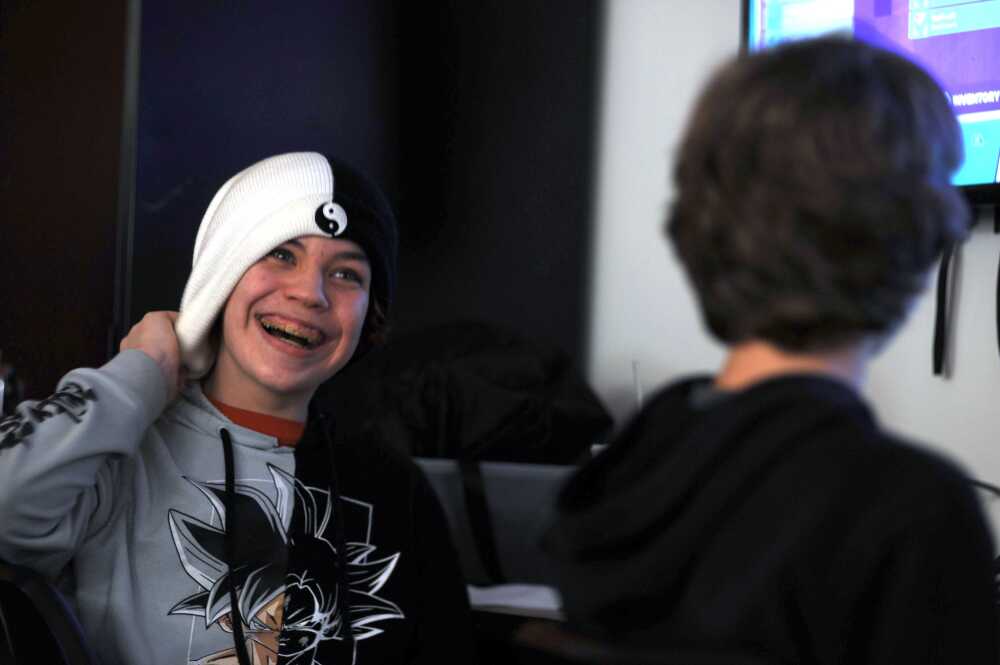 Atticus Harper celebrates a win with his teammates Thursday during the tournament Thursday at Cape Girardeau Junior High School.

Miller, who teaches art, wouldn’t describe games as his whole career, but says video games are something he wants to help develop and normalize within Cape Girardeau and neighboring school districts.

“When I leave education, I want to be able to look back at esports and say, ‘I was part of creating that,” he said. “This is a retention thing. It’s like, ‘How do we keep kids in school?’ This [esports] is one of the ways. It has been awesome. Honestly, the support of our administration has been ridiculous, they’ve just embraced it. Without the work of our main administration and our principal, Mr. (Garett) Cook, this wouldn’t have happened. Without that, we don’t exist. We got lucky that the higher ups saw some validity here. As a teacher, this is like a bonus to my day, and I think that’s what the kids feel, too, like this guy here, he’s so famous now,” Miller said, acknowledging Kaleb Williams who stood nearby.

By the tournament’s end, it wasn’t immediately clear who the students had won or lost against.

“It’s all kept pretty vague,” Miller said. “No student names are used in the national league. School names aren’t exactly used, either. It’s just whatever name a school makes up for their team.”

Although Miller has kept the Cape Girardeau Junior High School team name recognizable as “CJHS,” it’s not required for every school to recognizably name their teams.

Cape Girardeau’s team appears to be at the cutting edge of a very new school sport.

For his team’s success, Miller thanked the school administration, along with the support of his three other coaches: Matt Leimer, a science teacher; Ryan McKinstry, an industrial technology teacher; and Seyer, a math teacher.

“Our team of coaches are a huge part of our success. It’s more like a family. I am truly lucky to work with three other individuals who share the same passion for esports,” Miller said. “This is just such a new thing, it’s kind of off the map. I feel like we are trying to be the ones who draw the map.”

Ezekial Reiner prepares in the seconds before a match Thursday during the tournament Thursday at Cape Girardeau Junior High School.