Here’s the crux of the article in video form:

New updates are being added at the bottom of this story…

EA loves to be in the spotlight, even if for all the wrong reasons. Most of the titles published by the company seem to be affected by bugs and issues.

One of the upcoming games by EA is Madden 22. The game, which is scheduled to arrive on August 20 this year, lets players dive into the world of NFL.

A few days ago, players reported an issue with Madden 22 where the trial expired before time and users were unable to claim pre-order rewards.

Now, another bug has popped up that is preventing users from playing the game altogether.

People who have pre-ordered Madden 22 say that the game is crashing on Xbox as well as PlayStation.

Uninstalling and reinstalling the game does not help either. While some people report that the game crashes to the main menu, for others, it shuts down the console itself.

The game either crashes to main menu, or I lose connection to the EA Servers and get booted to the madden menu. I have not been able to complete the first half of a week 1 game let alone even finish. Anyone else experiencing this? Might be worst madden to date.
(Source)

So, xbox one, mut 22. Every time I click left bumper on a player in my binder the game crashes. Hopefully this will be fixed. Does EA know people pay money for their games? 😂😂 Sure doesn’t feel like it
(Source)

And the crashes aren’t tied to a particular point in the game. EA Madden 22 seems to be crashing randomly.

Players who have pre-ordered the game are really disappointed since the issue has rendered it unplayable for many.

Since then, EA has acknowledged the issue and said they are working on a fix.

In the last few years, the Madden series always seems to be plagued by some issue or another. If this trend continues, it won’t be long before players stop pre-ordering EA games altogether.

Note: We have more such stories in our dedicated Gaming Section so be sure to follow them as well.

11:46 am (IST): One of the affected players now notes that the only way to help ease this issue is by restarting the affected console. However, we cannot speak to the efficacy of this fix.

12:15 pm (IST): EA Support has confirmed, yet again, that they are aware of the crashing problem on the Xbox and are actively tracking the issue in a ticket that has been opened. Unfortunately, there’s still no ETA for a fix.

I understand you are facing crashing issues with Madden NFL 22 on Xbox Series X and that must be really frustrating. This issue is something we are aware of and are actively tracking in a ticket we have opened for the subject. Our game team is working on resolving the issue as soon as possible. Please keep an eye on our social media pages and forums for any further updates. Hopefully, you won’t have to wait too long. (Source)

1:21 pm (IST): Well, thanks to the power of the community, there might be a viable workaround for this issue. According to a user on Reddit these steps helped him get the game working. 2:29 pm (IST): Madden NFL 22players who are facing this issue on the Xbox are now advised to install the Xbox Insider app and use the ‘Report a Problem’ button to file a bug report, even as the team is looking into it. If this issue is being encountered, please install the Xbox Insiders app and use the ‘Report a Problem’ button to file a bug as the team investigates this issue. To do this, press and hold the Xbox button on your controller, select “Report a Problem” and complete the form.
Source

1:29 pm (IST): A number of Madden 22 players are facing crashes on their Xbox setups and social media is awash with reports from affected players.

In response to one of the affected players, EA Help on Twitter goes to say that these issues are being looked into as the team is aware. 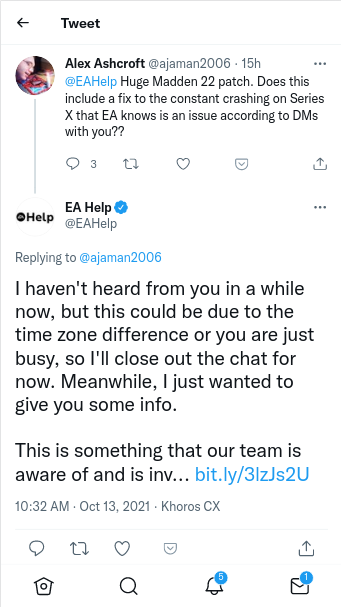 I haven’t heard from you in a while now, but this could be due to the time zone difference or you are just busy, so I’ll close out the chat for now. Meanwhile, I just wanted to give you some info.
Source

3:18 pm (IST): EA support confirmed that they are aware of the issue where players are being kicked to the dashboard or the game crashes while playing Solo battles.

We are aware of the issue and the games team is already working on the fix. We will get back to our players once the issue is resolved. (Source)

This new title update is available for the Xbox Series X/S and the PlayStation 5.

07:00 pm (IST): Even after installing the latest title update, some players are still reporting crashing issues with the game.

11:20 am (IST): Many Xbox and Play Station players are reporting (1, 2, 3, 4) that Madden 23 is crashing for them. Fortunately, EA has acknowledged the issue and said that the team is currently working on a fix.

Anthony, thanks for your patience and time. We know how frustrating if the game crashes so let me provide you with some info on this. The team is actively working on this situation to fix it soon. Have an eye on our Twitter channels and do let us know of any other concerns! -Amy (Source)

PiunikaWeb started as purely an investigative tech journalism website with main focus on ‘breaking’ or ‘exclusive’ news. In no time, our stories got picked up by the likes of Forbes, Foxnews, Gizmodo, TechCrunch, Engadget, The Verge, Macrumors, and many others. Want to know more about us? Head here.