Phantom Peaks is an immersive experience in South London that will let you spend an evening in a steampunk mining town in the Wild West, exploring the town and its mysteries. Groups of people mill around a series of shops and food stalls, while actors dressed in period gear chat amongst themselves and to punters, inviting you to get pulled into their world.

So far, so Westworld, but rather than violent delights and their violent ends, Phantom Peaks is rather more idyllic, letting players/visitors amble around talking to people and interacting with the weird steampunk town in just about any way you want.

The most exciting part of Phantom Peaks was that it offers plenty of options on ways to spend your evening in town. For me, the biggest draw was Phantom Peaks’ Trails – quests handed out by your phone that will have you talking to a bunch of people and actually investigating things. Our group was video game-literate and ready to solve quests, so we rattled through several of these Trails. Trails are the closest Phantom Peaks gets to being an escape room, and they’re also the best way to learn about the town and its inhabitants. While wandering Phantom Peaks, I found a pleasing dissonance to everything that made me want to find out more about it: maybe there was a burning blimp I wanted to know more about, a robot doctor to interrogate, or a weird platypus thing. Trails – served to you by your phone while you’re in the park, so make sure you’ve got a full battery when you arrive – give you a way to investigate, guiding you towards who you should talk to and what you should be investigating.

Gathering that secret knowledge is compelling. Slowly learning the secrets underpinning the town makes it fun, even when you’re circling back to your favourite character for the fifth or sixth time in a trip, telling them about the newest mystery you’re in that they can help with. A lot of these quests are underpinned by the technology everywhere: video terminals can be used to view secret messages, but you can also hack terminals with special override codes, often terminals that you’ve been using for other games. It feels like hacking, which is a cool way to move things into the real world. 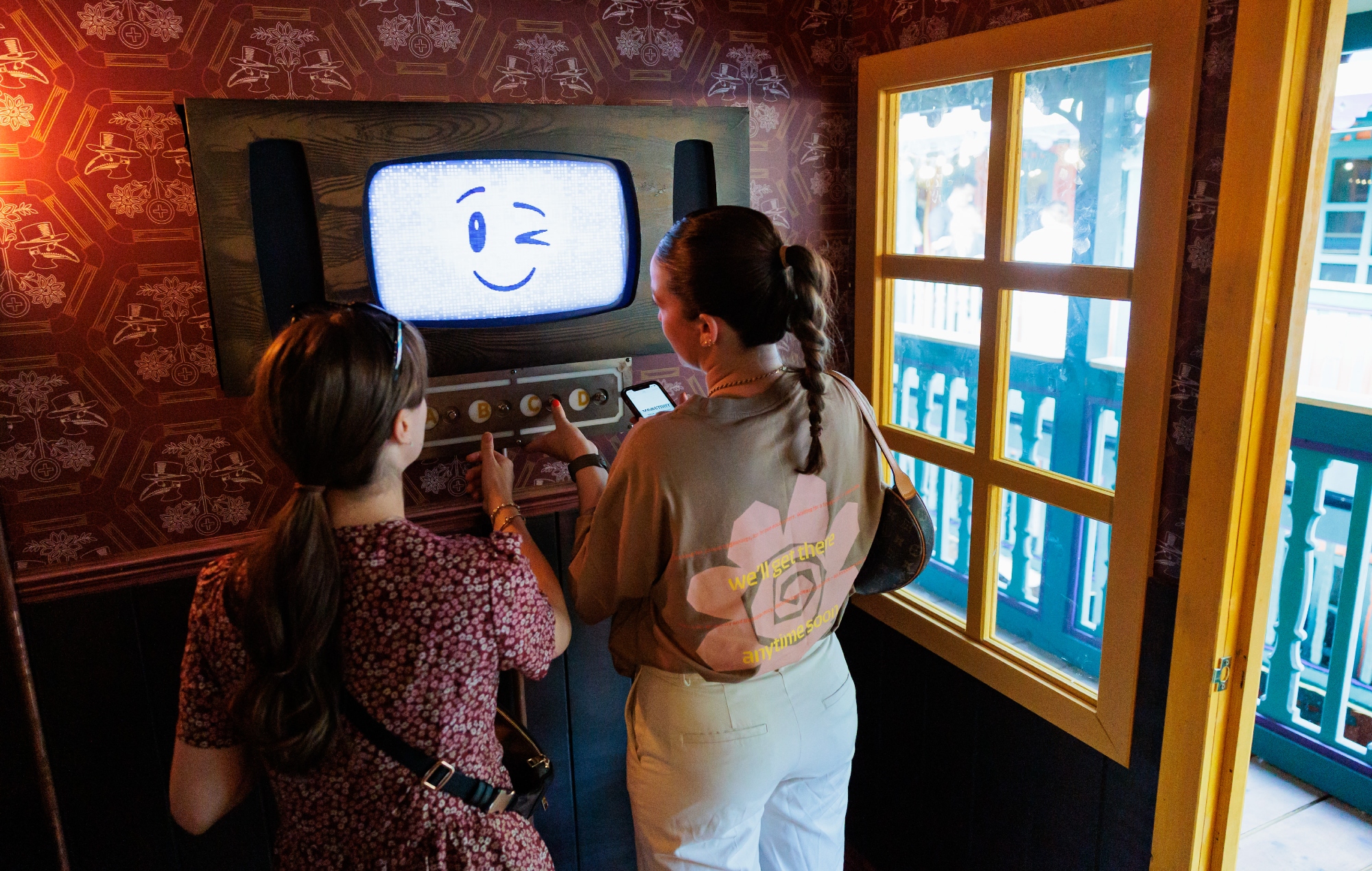 If you tie up a Trail, which usually takes around 20 minutes but can vary between stories, you’ll be given a playing card, emblazoned with the mystery you just solved. On our quest to earn these cards , we encountered groups of people that were enjoying the Old West vibe with a few drinks and some food, and even people that were just playing carnival games with the aim of getting enough rosettes to be considered an “honorary citizen” of Phantom Peaks. If anything, there’s too much to do in Phantom Peaks, which is good news because it means your visit will be jam-packed with things to do.

Even better, Phantom Peaks’ brilliant world design make these activities feel incredibly compelling. Good immersive theatre is about the suspension of disbelief. Sure, if you look closely enough you can see the cracks in Phantom Peaks – the skyscrapers edging into view over Phantom Peaks’ summerhouse, or the canvas covering turning a wooden tunnel into a mineshaft – but chances are you won’t care. From the moment you walk in through the unassuming wooden fence, it’s easy to forget you’re actually in Surrey Quays, about 15 metres from the entrance to the now-doomed Printworks. There’s not even anything to remind you: the bars and pop-up food stalls are all decorated in the same steampunk style, and while you’re getting your drinks in reusable plastic cups and paying with chip and pin, you’ll be too eager to get stuck into your next Trail or hop on a ridiculous boat ride to care too much.

If that doesn’t take your fancy, there’s some more conventional gaming to enjoy: you can toss tomatoes at targets, test your reactions, or play a memory game. These attractions are enjoyable enough, and getting a high score at all of them rewards you with rosettes. I was terrible at them, but it was a nice distraction as you were wandering around the place chasing mysteries, and it creates more of a feeling of being in a living breathing town with all of the stuff going on.

If you’re in London, or even London adjacent, Phantom Peaks is an excellent way to spend an evening, letting you get dropped into a mix between a puzzle game, a bar and a funfair. If this sounds like it’s your sort of thing, give it a go. It just might be.

Phantom Peaks runs from 5pm – 10pm on Wednesday, Thursday and Friday, with two different five-hour slots at the weekend. You can book tickets here.