Did you see our post a couple of days back about how you can now buy a Steam Deck straight from Valve without a reservation? (That’s true, by the way; you can pick one up right from their store page and have it in a week or two.) In that post, we embedded Valve’s YouTube video for the announcement, and while we watched the video, we weren’t sharp-eyed enough to notice a very interesting app tile in one part of the presentation.

Fortunately, Nibel (@Nibellion on Twitter) did notice, and got a screenshot of it. That app tile is the one on the far right in the screenshot, and if you’re not familiar with it by name, that’s the Nintendo Switch emulator for PCs known as Yuzu. 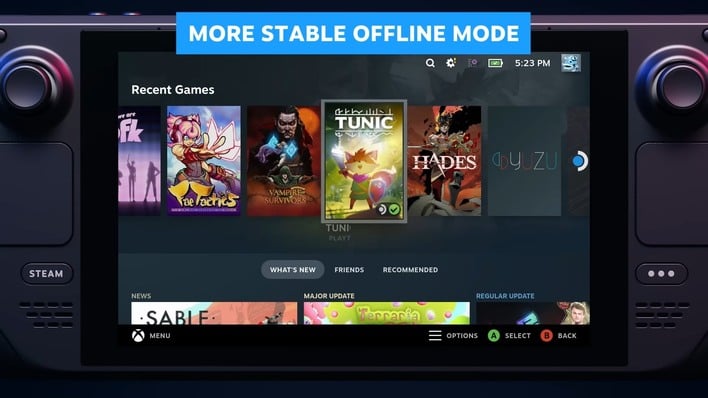 Yuzu is a highly-advanced Nintendo Switch emulator that plays the majority of Switch games even on relatively modest PC hardware. The app supports tons of killer features, including framerate unlocks, resolution scaling, and even local network play. While the emulator can’t connect to Nintendo’s servers for online multiplayer, you can play over a LAN or even the internet (if you trick it into thinking you’re on a LAN.)

Valve has since removed the original video and replaced it with a new one that drops the Yuzu icon in favor of Portal 2. Why is that, you may wonder? Emulation isn’t illegal, and it isn’t necessarily piracy, either, but it can be used in that way. Because of that, emulators have always lived in a sort of “grey area” in the marketplace, and companies like Nintendo absolutely hate the software. 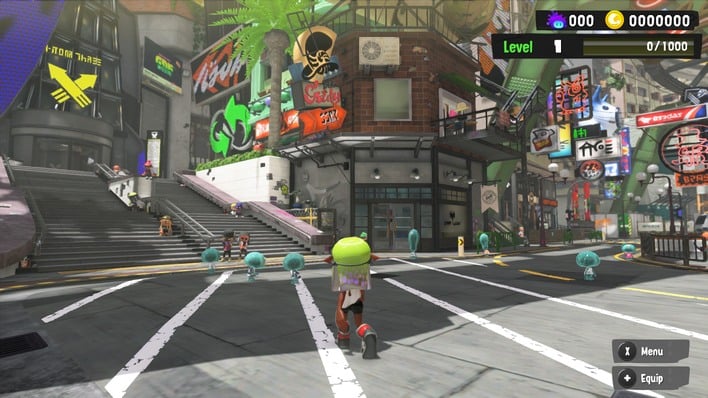 You can’t play Splatoon 3 online, but the single-player is still a lot of fun.

Valve hasn’t given any comment on the matter, so all we have is speculation, but it’s quite possible that someone saw the clip, blabbed to Nintendo, and Nintendo complained to Valve. It’s also possible that someone at Valve decided to make the switch before that could happen, as it’s only been two days. Either way, it’s an interesting choice of software to showcase on the Steam Deck.

While it isn’t on Steam itself, Yuzu does indeed run on the Steam Deck. In the video, it has clearly been added as a “non-Steam game”, which has benefits even for Windows gamers—you can use the Steam Input hierarchy for Yuzu. Believe it or not, the Steam Deck will even play the overwhelming majority of Switch games.

The Steam Deck’s quad-core Zen 2 processor struggles mightily under the weight of emulating a machine that’s not all that far removed from the Deck itself, but all of the titles screenshotted in this post will work, and the number of games that don’t is far fewer than the number that will. Other notable titles that are known to work include Hyrule Warriors: Age of Calamity, Super Mario Odyssey, and Pokemon: Sword and Shield.

However, The Legend of Zelda: Breath of the Wild, Animal Crossing: New Horizons, and the Xenoblade Chronicles games have major performance issues on the Steam Deck. Not every game is playable, and short of asking someone else who has tried it for themselves, you’ll probably have to test to see whether your favorite game works.

Keep in mind that to enjoy the benefits of emulating console games on PC, you will need to make sure you are playing your own dumps. That means, for Switch games, you need a modified Switch console that can perform the dumping process. Downloading ROMs from the internet and playing them, even if you own the hardware and the game, is technically still piracy under US law, and some places don’t have the Fair Use protections that US citizens enjoy.

If you’d like to get started with Yuzu, head over to the emulator’s Quickstart guide. It’s a bit of a misnomer as the process includes hacking your Switch and then dumping games which is non-trivial both in terms of skill and in terms of time. However, it’s certainly the quickest way to get started on legitimate Switch emulation.