I’m just going to get this joke out of the way: Fall Guys is the most autumnal video game. There we go. You may chortle and guffaw to your heart’s content, and then we’ll start the rest of this extremely niche, very specific article. You done? Good. Okay.

So! It’s Autumn, or Fall, depending on whether you’re in Blighty or ‘Murica, as of the 22nd September. For some of you, that means crunching your way through crisp orange leaves on the way to school; for others, it means getting the warm duvets out of storage; for me in particular, it means that I get to eat a ton of pie and drink hot chocolate, and no one gets to judge me. (Seriously, people are weird about having hot drinks in warm-ish weather! I ordered a hot toddy at a bar the other day and they laughed at me! IT’S ON YOUR MENU, MATE.)

It’s easy to get in the autumn mood with music, movies and TV — just stick on Hocus Pocus or Over The Garden Wall, get the fireplace roaring, and put Neil Young’s Harvest on the speakers. Mmm, cosy. But can video games evoke that same sweater weather vibe? Yes, they can. Hence this list.

The Most Autumnal Video Game Levels

This is probably the one that immediately jumped into the minds of many — a kart-based jaunt through the falling leaves of wherever Maple Treeway is. It’s not one of the courses that’s based on a particular area, although the presence of Wigglers makes it clear that it’s somewhere in Super Mario Land, but there’s something special about this course all the same.

Driving through leaf piles, winding through tree trunks, and getting fired out of a gigantic cannon — is there anything more autumnal?

Pumpkin Hill has it all when it comes to the spooky season, which is basically synonymous with Autumn. Sonic’s frenemy Knuckles has to explore around this Halloween-themed level, with pumpkins, ghosts, graves, bats, and skeletons, but the most memorable thing about Pumpkin Hill is, of course, the rap. Let’s take a look at some of those lyrics:

Let it get to me? I’m just gonna creep,
Down in Pumpkin Hill I gots to find my lost piece.
I know that it’s here, I sense it in my feet,
The great Emerald’s power allows me to feel.
I can’t see a thing but it’s around somewhere,
I gotta hold my head, I have no fear.
It probably seems crazy, crazy, a graveyard theory,
A ghost tried to approach me, he got leery.

You know in Star Trek how there are planets with One Defining Characteristic, like “we’re the planet that hates water”, or “everyone on this planet only eats worms”? Well, Super Mario Galaxy built on that idea with galaxies like this one.

In Gold Leaf Galaxy, the One Defining Characteristic is “Autumn”, and we aren’t complaining. This galaxy is populated by bees, which is a common theme in Super Mario Galaxy for whatever reason, and features multiple orange-hued planets. Much like Maple Treeway, Wigglers are featured as a sort of autumnal enemy, as well as Cataquacks, Undergrunts, and Flipbugs.

The Origami King does interesting things with colour, creating a world that’s deeper and richer-toned than past Mario games. Autumn Mountain is no different, swapping the usual orangey leaves for a much darker red and a buttery yellow. Even the collectibles in this level are a little more autumnal than usual, with Toads being folded into maple leaves and bugs, and a hidden Fallen Leaves treasure under the stairs.

Fun fact: The French name for this area is Mont Évermeil, a play on the words for bright red, vermeil, and “to fill with wonder”, émerveiller.

Autumn Heights is the second world in Tropical Freeze, modelled after the cuckoo clocks and rolling hills of Switzerland with an extra helping of decaying leaves. DK and pals will traverse through minecart tracks, air balloon platforms, and multiple cheese-related levels before reaching the final boss — a big, angry owl called Skowl.

Autumn is a secret unlockable alternative colour palette in Super Mario World, which you can get after completing the final level of the Special Zone — or, in the sequel, Super Mario Advance 2, but completing all 96 exits.

This colour swap doesn’t just change the green of the grass and trees to a lovely orange, though. Some enemies will also change appearance: Piranha Plants become little pumpkins on stalks, Bullet Bills turn into black birds, Koopas turn into orange versions of Mario for some reason, and in Super Mario Advance 2, Goombas turn yellow and wear sunglasses.

The Legend of Zelda: Oracle of Seasons – Autumn 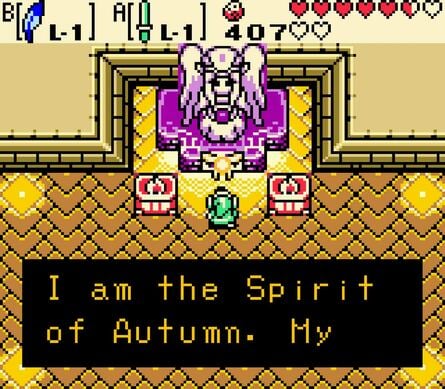 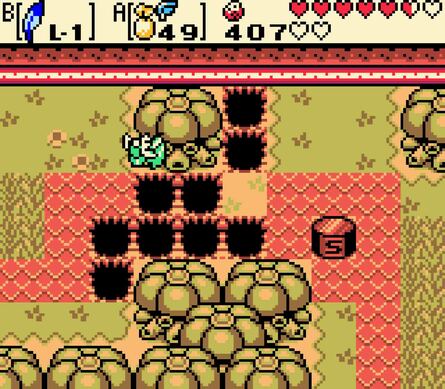 Oracle of Seasons has all the seasons. One of those seasons is Autumn. In fact, it’s the final seasonal spirit that you get, after completing the Tower of Autumn (which is where all the Autumn is kept). This season lets you pick Rock Mushrooms and Pegasus Seeds, as well as covering up holes with fallen leaves.

The Legend of Zelda: Breath of the Wild – The Akkala region

Breath of the Wild doesn’t have seasons, but the glorious colours of the Akkala region, where Tarrey Town and the Ancient Tech Lab can be found, are reminiscent of everyone’s favourite time of year. When it rains in Akkala, you just want to take shelter in the nearby stable and drink hot cocoa until the rain subsides. It’s lovely.

Click Clock Wood is a deciduous forest, and you know what that means: Red leaves, baby! Banjo and his backpack buddy Kazooie will have to enter Click Clock Wood during all four seasons to complete the area, and many of the puzzles within revolve around how the environment changes in each season. In Autumn, you’ll get the chance to meet Gnawty, the helpful beaver, visit the Tree House, and witness the blooming of Gobi’s beautiful flower. It’s the best season. Obviously.

Ni No Kuni: Wrath of the White Witch – Golden Grove

As its moniker suggests, Golden Grove is a fiery-orange wooded area within the Summerlands, where dappled light filters through soft yellow and orange leaves. It makes for a restorative glade where you can take a breather between the beginning of the game and the much more difficult Shimmering Sands, as well as add some cute little Familiars like the Napcap and the Pom Pom to your party.

Bellchime Trail, which is a short path between Ecruteak City and the Bell Tower where Ho-Oh used to live, is described as “bathed in sunset” — a beautiful description for a beautiful place. It may not be big, but it’s serene, with no wild Pokémon encounters and plenty of hidden items to keep you snuffling around its golden leaves.

Since this is an autumnal level that you can only visit in actual Autumn, barring time-travel shenanigans, it’s worth making the most of. It’s much quieter than Spring and Summer, with fewer fish and bugs to catch, but it still provides warmth and cosiness in the form of Mushroom furniture, acorns and pine cones, Turkey Day, and, of course, Halloween.

In your first year of Stardew Valley, this might be the season where you start to feel like things are going your way. Spring is usually spent learning the ropes; Summer is all about profit; but Autumn is a great time to invest in Winter-proofing your farm with animals and a greenhouse. Corn, cranberries, yams and pumpkins are all perfect for creating that harvesty vibe, and to top it all off, Stardew’s trees turn gorgeous shades of purple, maroon, and burgundy.

The Games That Are Actually Set In Autumn

Okay, yes. Firewatch is apparently set in the Spring of 1989. But you can’t fool us, Campo Santo. Orange is the colour of Autumn, and Firewatch is very orange. Who cares if it’s technically not actual Autumn if it makes us feel the way Autumn feels?

Night in the Woods

Night in the Woods’ environmental decay is a mirror to the social and economic decay of its setting, the former mining town of Possum Springs. Trees shed their leaves as a backdrop to this story of loss, grief, confusion, and disassociation — of all the games on this list, NITW is the only one that really explores the dark side of Autumn.

Autumn also happens to be the start of school for many countries, and that’s the case for Max Caulfield, a young woman returning to her hometown, getting reacquainted with old friends, and discovering her ability to rewind time. Life is Strange draws a lot of its inspirations from the small-town nostalgia and discomforting claustrophobia of Twin Peaks, and its Pacific Northwest setting helps the game feel suitably autumnal to match.

Mmm, we’re really in the mood for a cosy Autumn now. While we go put on a nice knitted jumper, make ourselves a cup of mulled cider, and try not to think about how Winter (and 2023) is just around the corner, tell us in the comments if you’ve got any favourite Autumn levels or games — or if there are any games you like to play whenever October rolls around.