Horror movies are the safest vehicle we have to play out and confront our fears. We love to be scared but we also love to shout at the characters on screen and tell them how to deal with crushing terror — for better or worse.

It’s why Supermassive Games’ 2015 gem Until Dawn was such a sleeper hit. It tapped directly into our playfulness with the genre by turning it into an actual video game. Now, that UK-based team is back with some new twists on the idea in The Quarry.

“For the most part, people in horror movies do stuff that [compels you to] go: ‘Well, don’t do that. That’s stupid. Don’t go in the attic. And if the light doesn’t work, go back in the morning!’ Giving people the choice in that is hilarious.” That’s Until Dawn and The Quarry director Will Byles, who spoke with Mashable ahead of the new game. He knows very well from the earlier release that giving players the tools to upend genre conventions is a winning formula.

It’s a design approach that has worked for Supermassive in large part because the people coming into these games tend to enjoy horror and know the basic genre rules already. They’ve had that firsthand experience of wanting a character to make different choices, whether it’s screamed in a theater or anxiously hoped for in silence. So the basic pitch of games like Until Dawn and The Quarry giving you direct sway over who lives and dies is very appealing.

It’s also not necessarily something that would work quite the same or have a similar impact in another genre. Byles is well-acquainted with the many different flavors of horror that exist today — he name-dropped wildly different classics like Friday the 13th, The Conjuring, and Alien during our chat — and while he readily acknowledges that there are vast differences setting each one apart, there’s a fundamental “essence” that connects them all.

“It sits outside of normal cinema,” he said. “The thing about horror is, every time I watch it, I get very excited beforehand. It’s almost like I have to dare myself to do it a little bit.”

The mental effort it takes to get into that headspace of wanting to be afraid also means that the people who like and crave those experiences understand the mechanics of how they work, at least on some level.

“Weirdly, that works nicely for the way I try to adapt [horror for games],” Byles said of the audience’s familiarity with horror tropes. “There’s a language that everyone kind of knows. It’s really useful knowing that there’s lot of clichés, lots of archetypal things.”

Byles pointed to one example of this from The Quarry, a place called “The Harbinger Motel.” It has that name, he said, “because there’s always a harbinger, there’s always an Ahab character that knows everything that’s going on.”

The thing about horror is every time I watch it, it’s almost like I have to dare myself to do it.

Horror is awash with generic conceits like the recurring presence of an all-knowing figure, or the “final girl” trope wherein the story’s sole survivor is a virtuous or at least redemptive woman. And that’s not even mentioning the revolution the Scream franchise set off when it explicitly acknowledged the rules that guide scary movies while actively subverting them. Fans in the 21st century are consciously aware of how horror works.

“There’s all of these kinds of archetypal characters and also a very, very well-known ruleset. Knowing that people will know that and then mucking about with that [in a video game where choice matters] is really good fun,” Byles said.

The promise of those trailers and early looks holds up, too. It’s the whole vibe during the first half of the story. But then you reach a fake-out moment which completely upends our understanding of what’s actually going on, and the genre language subtly, noticeably shifts.

It’s a clever trick that Until Dawn pulls; the kind of truly shocking “holy shit” moment that only the best stories, interactive or otherwise, tend to deliver. The villain turns out to be something else entirely, and the grisly mysteries that fill out the first half of the game are supplanted by a more primal and animalistic kind of fear.

The Quarry‘s story has its own surprises, but it also benefits from the gameplay and design lessons Supermassive has learned since 2015. Take the studio’s unique approach to online multiplayer (which is delayed until July 8), for example. Up to seven players tune in to watch a hosted session and then vote on game-defining choices, with the majority deciding the path forward. 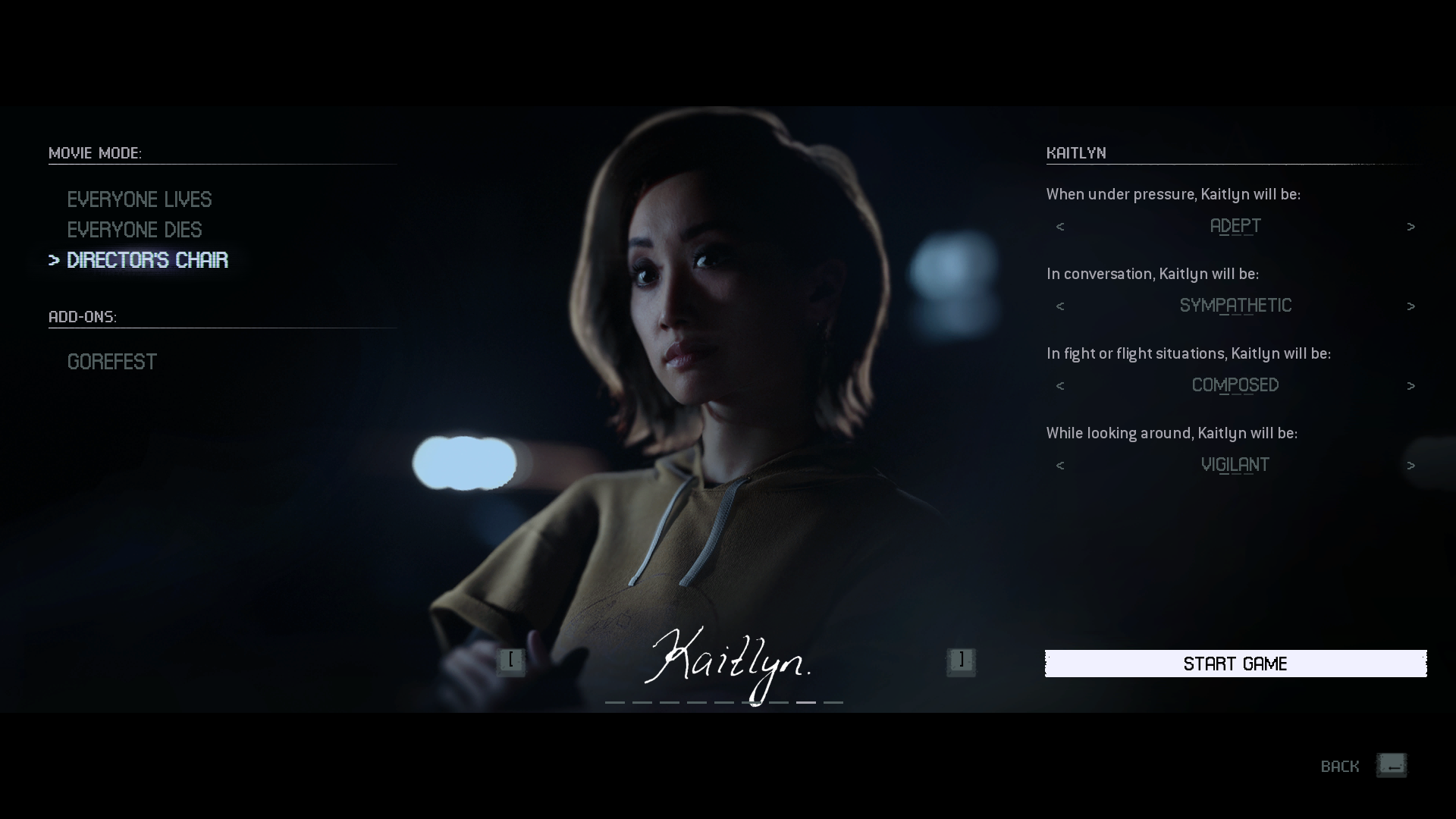 The “Director’s Chair” option in Movie Mode lets you set the parameters for how characters will act in a hands-off playthrough of the game.
Credit: Supermassive Games

Equally intriguing is The Quarry‘s “Movie Mode,” which lets you effectively set the game to play on autopilot. There are some broad, sweeping options for watching playthroughs where “everyone lives” or “everyone dies” (there’s also a “gorefest” option). But those are accompanied by a more involved “Director’s Chair,” which lets you tailor a personal horror movie for yourself by defining how the characters will behave in various situations, like when they’re in conversation or under pressure.

“Once you’ve set all of those, you hit play and God knows what’s going to happen,” Byles said. “No one will know. I have no idea how those are gonna play out because there’s so many variables.”

It’s a funny sort of full-circle dynamic, the way The Quarry lets the player step into the role of armchair director. You can play actively, like we did in Until Dawn, or you can fiddle with settings at the start to define the kind of horror movie you want to see, and then just sit back and scream.

The Quarry is out for PC, PlayStation, and Xbox on June 10.