VIDEO GAME FOOTAGE shared on social media masquerading as clips taken from the conflict in Ukraine have been a consistent misinformation theme online since the outbreak of the war.

One video of a black-and-white interface with crosshairs aiming toward aircraft on a runway was uploaded to Facebook with a caption: “Drone totally Destroyed Russian Air-base helicopters & fighter jet.” 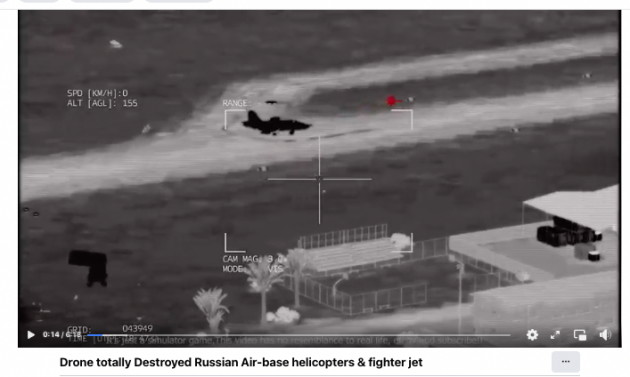 Screenshot of game footage mis-captioned as a war clip

However, the clip was not video taken of the Ukrainian conflict; instead it was lifted from a military-themed video game called Arma 3.

Arma 3 is described as “a true combat gameplay in a massive military sandbox” according to the developer’s website.

A reverse image search revealed the clips were originally uploaded to YouTube by an account that clearly described the videos as a simulation from Arma 3.

A YouTube user specified that the clip was not authentic by captioning it: “Warning: It’s just a simulator Game (Arma 3 ). This video has no resemblance to real life.”

A spokesperson for Bohemia Interactive, the developer of Arma 3, also confirmed to The Journal that the clips were taken from their game, Arma 3.

In another video uploaded to Facebook on 1 June, 2022, evening footage of helicopters being shot down in a rural location can be seen. 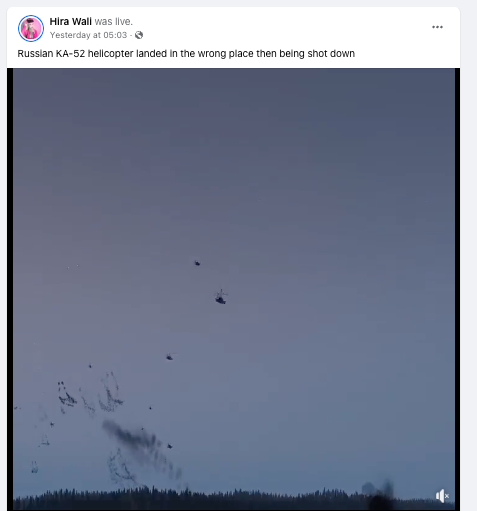 Footage claiming to be of a Russian KA-52 helicopter being shot down uplaoded to Facebook. June 1 2022

The accompanying caption read “Russian KA-52 helicopter landed in the wrong place then being shot down.”

Similarly, a reverse image search shows the footage was uploaded by a YouTube profile clearly denoting that the clip also originates from Arma 3.

The accompanying caption read “Russian KA-52 helicopter landed in the wrong place then being shot down.”

Similarly, a reverse image search shows the footage was uploaded by a YouTube profile clearly denoting that the clip also originates from Arma 3.

So why are we seeing multiple examples of video game footage being used to promote false content around the Ukrainian conflict?

“Video quality tends to be of lower quality and not easy to discern on a phone screen,” he said.

This type of misinformation is known as ‘false content’ misinformation, Silva explained, where a piece of content such as video or imagery is shared online with false context to change its meaning.

“We also tend to accept what we see at face value, since most of our social media consumption is passive. We need to be more critical of information we encounter, practise healthy scepticism and take steps to verify what you see,” he said.

Dr Kristopher Alexander, Professor of Video Game Design at Toronto Metropolitan University, told The Journal it is important to trace such footage to its original source.

“Any suggestions not made by the poster or creator of the original video may alter the message and/or the narrative,” he said.

“There are some technical giveaways, but the most important thing is to source check.”

No news is bad news
Support The Journal

What are some ways to differentiate between video game clips and authentic footage?

Even a retired US four-star general got caught out retweeting footage from a game, claiming it to be taken from Ukraine.

One of the technical giveaways that something is video game footage is a sign of a process known as anti-aliasing, which is a “computer graphics technique used to add realism by smoothing out jagged edges on in-experience artefacts,” Alexander said.

Popular games such as World of Tanks and War Thunder have a user-interface showing player statistics, which is a “tell-tale sign” of video game footage, according to Peter Lynch, Programme Chair, Game Design at Technological University Dublin’s School of Media.

The main goal for games such as military simulations, Lynch said, is to achieve the “highest possible degree of photo-realism at an acceptable minimum rendering speed”.

“That speed is usually 24 frames per second”, which is the “minimum a human eye needs in order to create the illusion of movement”, he said.

One of the techniques that gives such games a hyper-realistic look is simulating lighting through a rasterisation process – but this technique, too, can be a key give-away on whether a clip is a video game simulation and not authentic footage.

“In addition, the game designer may deliberately be using dramatic lighting to enhance their game world – again most viewers will be able to spot this as computer generated,” he said.

“The gap between real world and computer graphics is narrowing at an incredible rate,” Dr Jethro Shell, Senior Lecturer in Games and Information Systems at De Montfort University, told The Journal.

“The latest game engines can produce hyper real images. There are still some areas that it lacks some polish, but for someone that is less open to the abilities of such engines it can be difficult to see,” he said.

The Journal’s FactCheck is a signatory to the International Fact-Checking Network’s Code of Principles. You can read it here. For information on how FactCheck works, what the verdicts mean, and how you can take part, check out our Reader’s Guide here. You can read about the team of editors and reporters who work on the factchecks here.