Vudu is offering the anime series “Hunter x Hunter” at a discount.

Vudu is hosting a sale May 6-9 on the popular Japanese animated television series “Hunter x Hunter.” 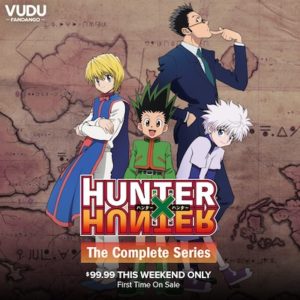 Anime fans can purchase the complete “Hunter x Hunter” series (seven seasons, 148 episodes) as one bundle for $99.99 (regularly priced at $270 for all 7 seasons) through the end of the day May 9.

The series is based on Yoshihiro Togashi’s manga series.